This blog post is inspired by a wonderful and entertaining video called Simple Made Easy by Rich Hickey. It explains the difference between easy & simple, and why we’re obsessed with the wrong one. It’s a sentiment I’ve known for a long time but I’ve never seen it put in to words before. The rest of this post is just my brief take on the subject, watching the video is highly recommended.

Simple is the opposite of complex, it implies there won’t be a big cognitive overhead involved in what’s being done. It doesn’t imply that what’s being done will be quick or require only a little effort. Easy is the opposite of hard or difficult, it implies that only a little effort will be needed. It doesn’t imply things are going to be straight forward or understandable. Both these terms are subjective but the difference is very important and they are often used the wrong way round. 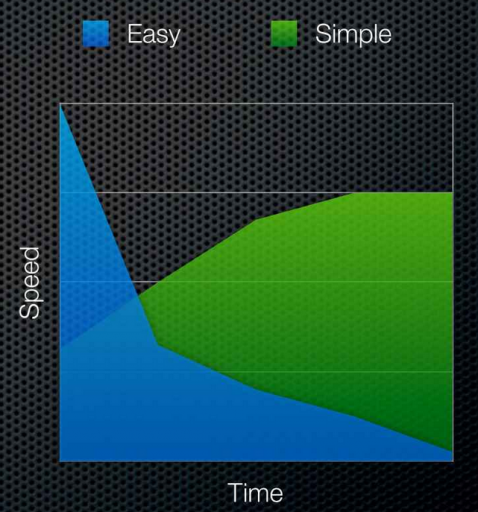 The trade off is that easy is very quick to get going with, “Hey look, I typed these commands in and now I have an app” but two months in to the project understanding the app will take more time than it should; “What’s this dependency for, do I have to use xml for my data?!”. The video I espouse above contains this diagram, it illustrates the point well. Simple tools, languages, frameworks etc… may be slower to get stuff done with initially but in the long run they will be faster as everything makes sense and the app isn’t getting bogged down in increasing complexity as time goes on.

As a software engineer I often find myself working with easy and complex tools, languages or frameworks but I’d much rather use something simple and put in a little hard work to build something that is itself simple. Simple code is easier to debug and maintain, especially for people new to it. I think something can be both simple and easy but a lot of the time people probably just have a lot of experience and deep knowledge about something complex that makes it seem simple to them. I’ve often noticed how new software comes out and people love it as it’s simple while still doing something useful. Then they want to make it better, they add features, which is fine, but unfortunately they also try to make it easier to use. In doing so it becomes complicated and eventually requires people to climb a steep learning curve to understand it. The video makes this point (probably better than I do) and other related points but this one really stuck out for me. Now go and watch the video.